The images on this page are provided courtesy of Museum of Idaho.

The History of Funland

1940s-era amusement park remains a nostalgic icon in the community

In 1948, the first Polaroid camera was sold in the United States, Kenny Loggins was born, and the Olympics were held for the first time in 12 years after a hiatus due to World War II. The U.S. was enjoying economic growth and cultural stability after the Great Depression and WWII, and in Idaho Falls, Idaho, that hope of a brighter future was embodied in the establishment of Funland, a collection of classic carnival rides and a refreshment hut located in the heart of Tautphaus Park.

Tautphaus Park itself had long been known for its recreation opportunities and gathering spaces. In the late 1880s, Charles “C.C.” and Sarah Tautphaus transformed the plot of land that would eventually become Tautphaus Park into an elaborate farm for their family of five daughters. After extensive construction efforts that included forming the Idaho Canal to bring water from the Snake River to their property to create a six-acre lake, the entire community would grow to enjoy the man-made waterfall, the apple orchards, the picnicking, the boating, and the seasonal ice skating.

The early years of Tautphaus Park also included rodeos, beauty contests, and the first recorded aviation in Idaho Falls (when Charles Willard flew his Curtis biplane in 1911). In the 1930s, the Workers Progress Administration built several log structures in the park, one of which was a restroom and changing facility for those visiting the lake. The first animals were brought to establish a zoo at Tautphaus Park in 1935, and in 1947, the lake was filled in to create a picnic shelter, parking lot, and baseball fields. This was also the year that the Western Amusement Company — made up of Dr. G.B. Crabtree, Joe Gesas, and Brad Minor — secured the lease from the City of Idaho Falls for the space to create Funland. They promised the City Council two fully operational carnival rides and a concession stand by the spring of 1948 and they delivered, building three carnival rides and extensively remodeling the old changing facilities into a restaurant with music, dancing, and food. The original three rides included the merry-go-round, the miniature train ride, and an airplane swing ride. An “octopus” ride was added to the lineup in 1949, followed by a Ferris wheel and eventually a miniature golf course. 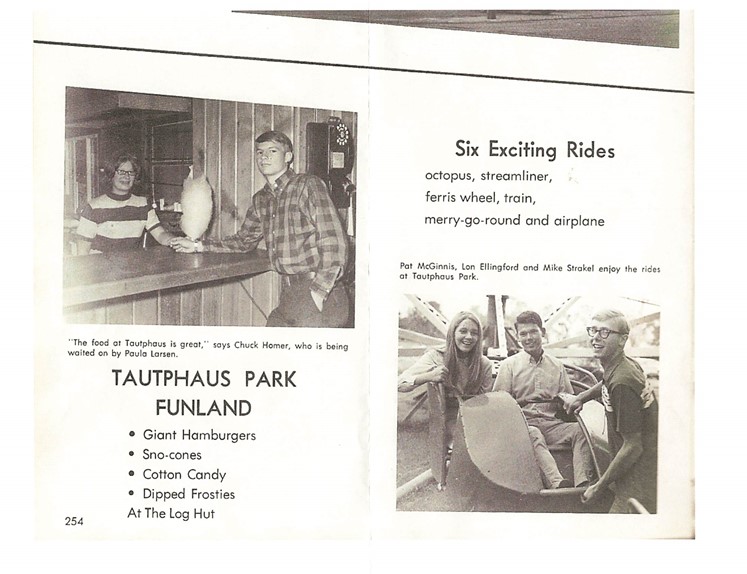 The three initial carnival rides were groundbreaking at the time and have remained historically significant. The miniature train ride was imported from Italy, the airplane swing ride was made out of gasoline drop tanks from B-17 bombers, and the merry-go-round is one of only two in the entire United States that was installed in the late 1940s and is still operational in its original location. Ownership and management of Funland has shifted over the years, from its initial owners to longtime owner Leo Larsen, who began working at Funland as an equipment mechanic and eventually purchased the property and owned it for more than 50 years. In 2000, Larsen sold Funland to Ann Rehnberg, a passionate advocate of the historic amusement park, who owned it for almost 20 years before selling it to the City of Idaho Falls. The community will forever be indebted to both Leo and Ann for having the vision and determination to preserve Funland.

Hundreds of thousands of children and adults alike have frequented Funland over the decades, visiting this community icon for a touch of nostalgia and simple pleasures.